The Bradley Model is a chart constructed on a set of astrological parameters defined by Donald A. Bradley in his famed 1948 book, Stock Market Prediction (The Planetary Barometer and How to Use it).

The foreward, by Llewellyn George begins as follows:

"Although this text is not primarily intended to be a stock market forecaster, yet by judicious operators it is quite likely to become their most valued treasure for anticipating trends and changes which are due to mass mind activity.

It tells how to properly chart that psychological activity in compliance with well known planetary forces."

OK, now I understand fully that your first inclination here will be to laugh like hell, and go to chaneling Festus, who once famously said to the apostle Paul, "You are beside yourself!  Much learning is driving you mad!"

Especially those of you who insist on picking up the telephone in order to offer a personal harangue over any mostly innocent notion I may have that doesn't correspond perfectly with your own personal world view.

Before you go there however, consider this.

If you're a Christian, and I know for a fact that a mess of you are.

On the fourth day, God himself said, and I'm quoting here,

"Let there be lights in the firmament of the heavens to divide the day from the night; and let them be for signs and seasons, and for days and years."

The word Lunacy is derived from the same root as the word Lunar, Luna the Roman moon goddess. This relationship extends to other languages, most notably Welsh where these two words are lloer and lloerig.

Regardless of you spiritual inclination, anecdotal evidence persists regarding police department and emergency rooms ramping up during full moons, although there is almost no scientific or statistical evidence of any correlation between the full moon and increased crime, emergency room visits, births or anything else.

Almost without exception, every study that has been able to demonstrate any correlation between the full moon and any studied event has been subsequently debunked.  What's most interesting here is that the debunkers almost universally believe in "Global Warming" (Just Kidding)

The Chart below is that for the "Bradley Model" calculated from about 1840 through about 2040.

It is simply charting the sum (positive or negative, zero is down the middle) of a set of mathematical values Bradley attached to the angles of relationship between the Sun, the Moon, and the planets that make up our solar system.

Planets in relationship of or near 0, 60, 90, 120 and 180 degrees were considered and a value (again positive or negative) was assigned each.

The positive or negative values were assigned on the basis of the historic consensus having to do with the benefic, or malefic qualities of each planet within each angular relationship between the planets.

Don't worry about it.  Here's all you gotta know.

Just look at the chart, up is good, down is bad. 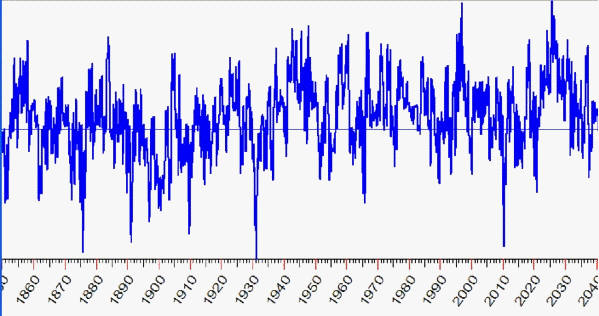 It catches the "The Panic of 1873", which began "The Long Depression" which according to the National Bureau of Economic Research lasted until March 1979, a total of 65 months and longer by nearly a year and a half than "The Great Depression"

Take note of the extremely low, low point that so nicely corresponds with the "Crash of 29" stock market descent that extended from 9/3/29 until about 7/32, and the mostly continuous lows during "The Great Depression".

And, how bout that big fat high point sitting over the middle to late 1990's.

(The above was a time continuum joke)

Your Uncle Roany is in Cash (Mostly Canadian) and Gold!!!