Make a bomb in the kitchen of your mom?

To begin with, I'm still not entirely certain of what works and what doesn't with regards to the free stuff at Stratfor

I hope this works ... you might have to fool around with something.

I've created a link from the photo below to Stratfor's latest article regarding Inspire Magazine, the al Qaeda english language jihadist magazine.

As I have also said before, I subscribe to Stratfor.

I don't even know what it costs anymore, mostly because I'm afraid to.

Still, as far as I'm concerned, Stratfor is the single best site in the world for a "news junkie". 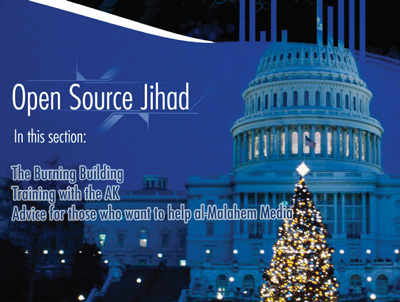 The “Open Source Jihad” section contained a photograph of the U.S. Capitol building with a Christmas tree in the foreground on the first page.

The “What to Expect in Jihad” section featured a graphic of a sticky note with a to-do listreading: buy handguns, make a bomb in mom’s kitchen, blow up Times Square and “pull off Mumbai near Whitehouse ‘till martyrdom.”

This section also had a graphic of an envelope marked with the word “Anthrax.”

The photograph of the U.S. Capitol, followed by a reference to an armed assault directed against soft targets near the White House (and the anthrax envelope), will certainly raise some eyebrows in Washington — especially since the Open Source Jihad section of the second edition of Inspire had a photo of the Chicago skyline, and the subsequent plot involving explosive devices hidden in printer cartridges were in packages sent to Chicago.

Don't bother running out, I already checked Barnes and Noble ..... no luck.