The Real Wives of Wall Street

Despite their inability to quite put down the cool aid (see their comment below, "According to popular legend, we're broke) Rolling Stone has glommed on to the fact that the FED is accountable to nobody.

illiustration below for the entire piece.

The Real Housewives of Wall Street

Why is the Federal Reserve forking over $220 million in bailout money to the wives of two Morgan Stanley bigwigs? 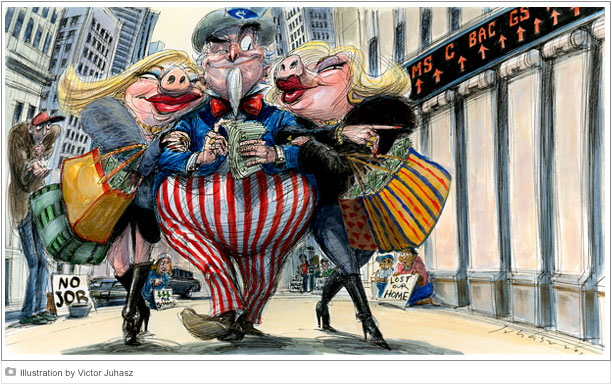 America has two national budgets, one official, one unofficial. The official budget is public record and hotly debated: Money comes in as taxes and goes out as jet fighters, DEA agents, wheat subsidies and Medicare, plus pensions and bennies for that great untamed socialist menace called a unionized public-sector workforce that Republicans are always complaining about.
According to popular legend, we're broke and in so much debt that 40 years from now our granddaughters will still be hooking on weekends to pay the medical bills of this year's retirees from the IRS, the SEC and the Department of Energy.

Why Isn't Wall Street in Jail?

Most Americans know about that budget. What they don't know is that there is another budget of roughly equal heft, traditionally maintained in complete secrecy. After the financial crash of 2008, it grew to monstrous dimensions, as the government attempted to unfreeze the credit markets by handing out trillions to banks and hedge funds. And thanks to a whole galaxy of obscure, acronym-laden bailout programs, it eventually rivaled the "official" budget in size — a huge roaring river of cash flowing out of the Federal Reserve to destinations neither chosen by the president nor reviewed by Congress, but instead handed out by fiat by unelected Fed officials using a seemingly nonsensical and apparently unknowable methodology.