Just another example of why they all gotta go.

“US Senators need to hear from you

, on whether you think your front yard is part of a ‘battlefield’ and if any president can send the military anywhere in the world to imprison civilians without charge or trial. The Senate is going to vote on whether Congress will give this president—and every future president — the power to order the military to pick up and imprison without charge or trial civilians anywhere in the world.

The power is so broad that even U.S. citizens could be swept up by the military and the military could be used far from any battlefield, even within the United States itself. The worldwide indefinite detention without charge or trial provision is in S. 1867, the National Defense Authorization Act bill, which will be on the Senate floor on Monday.

The bill was drafted in secret by Sens. Carl Levin (D-Mich.) and John McCain (R-Ariz.) and passed in a closed-door committee meeting, without even a single hearing…Now is the time to stop this bad idea.

Please urge your senators to vote YES on the 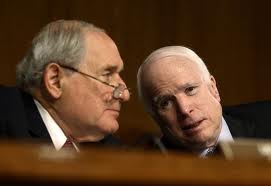 These provisions are being reviled across the political spectrum.

There are a number of petitions available at sites ranging from the ACLU to Ron Paul.

We selected the ACLU to link up to only because our Senator Levin is a well known card carrying member with an 84% lifetime score.

Take a minute and decide if you think it's a good idea for the United States Military to be arresting American citizens and holding them indefinately without charge or trial, for any reason.

It is our opinion that the potential for abuse is staggering and that it is a certainty that if enacted these provisions will be abused.

As always when Congress comes after the freedoms of the citizenry it is in the interest of protecting us from terrorists.

It is becoming increasingly clear to us that the interests of "Terror" and Congress are dovetailing quite nicely.