Riding on a Saturday Morning

I had promised somebody an update post on my colt when I got him back from the convalescent home and then didn't do it. 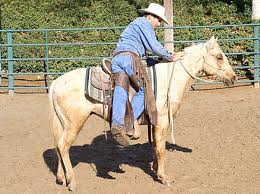 If you remember we made not one but two breakneck trips across the state of Michigan to the MSU large animal hospital this fall, the first for emergency

colic surgury, the second mostly because the colt must have figured I didn't spend enough money on him the first time.

I picked him up and brought him home two weeks ago.

Went back to work on him the next day.

Mostly because I am way too old to be getting my butt bucked off a horse, Scotty got on him for the first time a week ago Friday.

I got on him Saturday and put his eighth ride on him this morning.

I had him saddled in September before he got sick and had hoped to be on him by Halloween, so my colt was way ahead of the filly in this

Still it's very good stuff and will probably surprise those people who think horses are getting broke ..... literally.

I left out the first video in this series as it was beyond introductory, videos 3, 4 and 5 are very good as Richard Winter gets this very nice, mature, and easy going two year old filly saddled and mounted in the course of an hour or so clinic.

It's always way easier and a lot safer after some hours of handling and ground work.