Sometimes a map is all you need

The following is from Wired.com

via our friends at

As always click on the map for the entire piece.

Public Intelligence, a non-profit that advocates for free access to information, released a map of military UAV activities in the United States on Tuesday. Assembled from military sources — especially this little-known June 2011 Air Force presentation (.pdf) – it is arguably the most comprehensive map so far of the spread of the Pentagon’s unmanned fleet. What exact missions are performed at those locations, however, is not clear. Some bases might be used as remote cockpits to control the robotic aircraft overseas, some for drone pilot training. Others may also serve as imagery analysis depots.

The medium-size Shadow is used in 22 bases, the smaller Raven in 20 and the miniature Wasp in 11. California and Texas lead the pack, with 10 and six sites, respectively, and there are also 22 planned locations for future bases. ”It is very likely that there are more domestic drone activities not included in the map, but it is designed to provide an approximate overview of the widespread nature of Department of Defense activities throughout the US,” Michael Haynes from Public Intelligence tells Danger Room.

The possibility of military drones (as well as those controlled by police departments and universities) flying over American skies have raised concerns among privacy activists. As the American Civil Liberties Union explained in its December 2011 report, the machines potentially could be used to spy on American citizens. The drones’ presence in our skies “threatens to eradicate existing practical limits on aerial monitoring and allow for pervasive surveillance, police fishing expeditions, and abusive use of these tools in a way that could eventually eliminate the privacy Americans have traditionally enjoyed in their movements and activities.”

As Danger Room reported last month, even military drones, which are prohibited from spying on Americans, may “accidentally” conduct such surveillance — and keep the data for months afterwards while they figure out what to do with it. The material they collect without a warrant, as scholar Steven Aftergood revealed, could then be used to open an investigation.

The Posse Comitatus Act prohibits the U.S. military from operating on American soil, and there’s no evidence that drones have violated it so far. 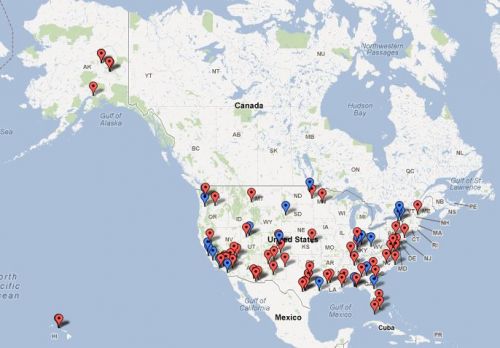 So far being the operative phrase.