From CNN Money who has been on a roll lately.

As always click on the photo below in order to link up to the entire piece.

Since we're on the subject, here's a three minute vid

also from CNN Money on youth unemployment in America. 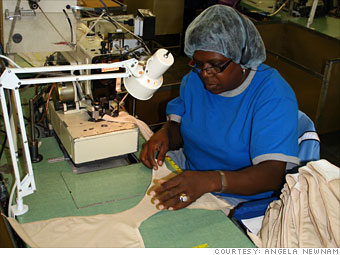 FORTUNE -- Hemingway Apparel, located in a rural former cotton town a hundred miles east of South Carolina's capitol, should be the kind of small business that government nurtures. In a county where the unemployment rate hovers near 12%, the factory employs low-skilled workers who don't have a lot of options.

Hemingway barely survived the drift of apparel production overseas. Today, company owner Jack L. Marsh benefits from the "Made in America" determination of top customer Angela Newnam.  The Harvard Business School grad and former McKinsey consultant also happens to be a daughter of the Carolina textile mills who is putting her company, Knockout Panties, behind her stubborn belief in American manufacturing.

The Marsh-Newnam partnership has all the makings of a grassroots business story that -- stitched with thousands of others -- could aid an American jobs revival. Except for one thing: Marsh isn't hiring. He's being killed by unemployment taxes that are on their way to quadrupling since 2009. When new business comes calling, Marsh says, "I have to ask myself if there's another way to meet production needs without adding employees.'' He would rather pay overtime than shell out a per-worker tax of $900 (up from $270 three years ago) that is slated to rise to about $1,100 in 2014.