As always, click on the photo for the entire piece. 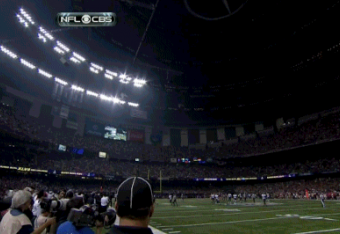 While the Baltimore Ravens and San Francisco 49ers compete to hoist the Vince Lombardi trophy this weekend, eco-friendly fans and city leaders in New Orleans are competing to maximize sustainability practices to the fullest.

To make this the greenest Super Bowl, the New Orleans Host Committee has partnered with fans and the community to offset energy use across the major Super Bowl venues. The exterior of the Mercedes-Benz Superdome features more than 26,000 LED lights on 96 full-color graphic display panels, designed to wash the building in a spectrum of animated colors, patterns and images. The system draws only 10 kilowatts of electricity -- equivalent to the amount of energy used by a small home -- and the lights are expected to last for many years before needing replacement.

Off the football field, New Orleans is embracing energy efficiency with help from the Energy Department. The city retrofitted four libraries using an integrative design approach -- adding motion sensor lights, energy-efficient heating and cooling systems, and upgrades to the building envelopes. These improvements helped cut the libraries’ energy costs by 30 percent and serve as a standard for other city-owned buildings. New Orleans streets feature more than 1,200 energy-efficient light fixtures. In addition to saving the city money on energy costs -- an estimated $70,000 annually -- the new lights help the city reduce routine maintenance due to their longer lifespan.

Embracing energy efficiency and renewable energy is having a profound impact on attracting developers and private industry in the New Orleans’ re-building efforts. The push to re-invent this destination city contributes to making Sunday’s game the greenest in Super Bowl history.

Somebody maybe should have told Beyonce' to dial it down a tad.