Three sides to every story

Many, many years ago a wise, old divorce attorney told me, and I quote,

"Roany me boy" he said, "There are three sides to every story, his side, her side and the truth." 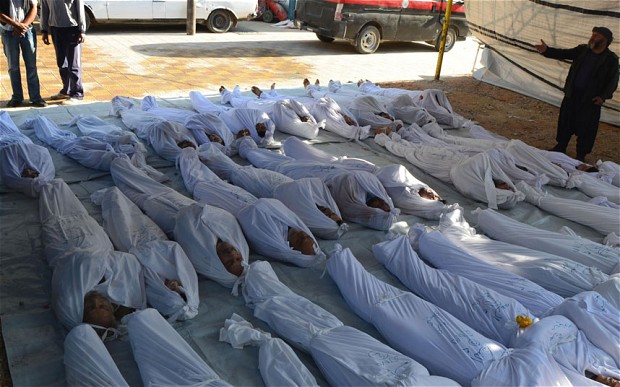 We've all heard the warmongering NeoLibs and their Democrat tools, both in government and media, flogging their story about the criminal Assad dictatorship murdering it's own citizens with sarin gas in much the same fashion that the murderous NeoCons and their significantly fewer but still highly effective Republican tools in government and media, once flogged their story about Iraq and weapons of mass destruction.

Now let's hear the other side shall we?

Wherein the Russian, Iranian and Chinese supported Assad government provides evidence exposing the murderous practices of the US and Saudi financed al Queda Syrian rebels, the very same terrorist organization that supposedly brought down the World Trade Center on September 11, 2001 and is widely promoted as being America's mortal enemy.

Your Uncle Roany is buying the third side to this story.

That being that both sides in this tragic c%#&@^$ f&#% are lying, scum sucking murderers that no thoughful person would under any set of circumstances have anything to do with, let alone partner up with.

This of course makes them identical to the Russian, Iranian, and Chinese backed Assad government as well as the US and Saudi backed al Queda rebels.

Watch this vid, it's short, to the point and should serve to piss you off real good.

As an aside, where are all those impassioned anti-war protesters nowadays?

You know the ones, those good folks out there in the street, spewing about lies and liars and giving peace a chance during the Iraq and Afghan wars.

Oopsies, silly question, they're Democrats and as such they only hate Republican wars.