If you are going through hell,

keep going.
You can always count on Americans to do the right thing - after they’ve tried everything else. 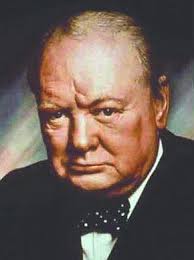 A man is about as big as the things that make him angry.
Although prepared for

martyrdom, I preferred that it be postponed.
He has all the virtues I dislike and none of the vices I admire.
He is a modest little man with a good deal to be modest about.
The best argument against democracy is a five minute conversation with the average voter.
It has been said that democracy is the worst form of government except all the others that have been tried.
Do not criticize your government when out of the country.  Never cease to do so when at home.
Personally, I’m always ready to learn, although I do not always like being taught.
Some people’s idea of [free speech] is that they are free to say what they like, but if anyone says anything back, that is an outrage.
Politics is not a game. It is an earnest business.

There is no such thing as public opinion.  There is only published opinion.
History is written by the victors.  History will be kind to me for I intend to write it.
Study history, study history.  In history lies all the secrets of statecraft.
The farther back you can look, the farther forward you are likely to see.
The inherent vice of capitalism is the unequal sharing of blessings; the inherent virtue of socialism is the equal sharing of miseries.
We must beware of trying to build a society in which nobody counts for anything except a politician or an official, a society where enterprise gains no reward and thrift no privileges.
It is a socialist idea that making profits is a vice; I consider the real vice is making losses.
You may try to destroy all the wealth and find that all you have done is increase poverty.
We contend that for a nation to try to tax itself into prosperity is like a man standing in a bucket and trying to lift himself up by the handle.
There is no finer investment for any community than putting milk into babies.
If you have ten thousand regulations you destroy all respect for the law.
Saving is a fine thing.

Especially when your parents have done it for you.
I am an optimist.  It does not seem too much use being anything else.
The optimist sees the opportunity in every calamity.  The pessimist sees calamity in every opportunity.
However beautiful the strategy, you should occasionally look at the results.
When you get a thing the way you want it, leave it alone
A lie gets halfway around the world before the truth has a chance to get its pants on.
We occasionally stumble over the truth but most of us pick ourselves up and hurry off as if nothing had happened.
Let our advance worrying become advance thinking and planning.
When I look back on all these worries, I remember the story of the old man who said on his deathbed that he had had a lot of trouble in his life, most of which had never happened.
A fanatic is one who can’t change his mind and won’t change the subject.
I have taken more out of alcohol than alcohol has taken out of me.
”Lady Astor, “Winston, if I was your wife I’d put poison in your coffee.”  “Nancy if I were your husband, I’d drink it.”
Old expressions are the best, and short ones even better.
The nation will find it very hard to look up to the leaders who are keeping their ears to the ground.
To jaw-jaw- is always better than to war-war.
Nothing in life is so exhilarating as to be shot at without result.
A prisoner of war

is a man who tries to kill you and fails, and then asks you not to kill him.
The problems of victory are more agreeable than the problems of defeat, but they are no less difficult.
I hope I shall never see the day when the Force of Right is deprived of the Right of Force.
Some men change their party for the sake of their principles; others their principles for the sake of their party.
To build may have to be the slow and laborious task of years.  To destroy can be the thoughtless act of a single day.
If you go on with this nuclear arms race,

all you are going to do is make the rubble bounce.
The length of this document defends it well against the risk of it ever being read.
I like pigs.  Dogs look up to us.

Cats look down on us.

Pigs treat us as equals.