Dear Mr. Dimon, Is Your Bank Getting Corporate Welfare?

here's just one more example of the pervasive collusion between our government the banks and in this case the seemingly ubiquitous J.P. Morgan.

Click on the photo of Mr. Dimon below for the entire story.

Among the real good questions you didn't hear from anyone in Congress during the Jamie Dimon festival of love recently held on Capital Hill.

Dear Mr. Dimon, Is Your Bank Getting Corporate Welfare? 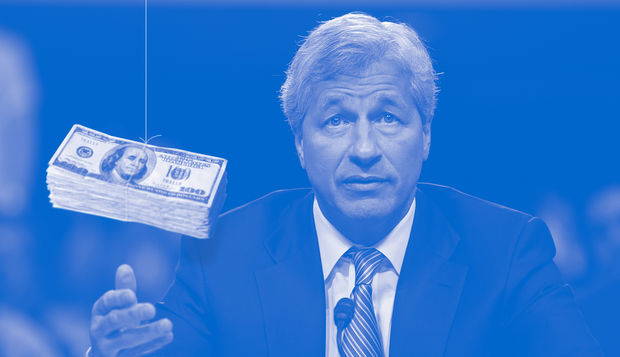 When JPMorgan Chase & Co. Chief Executive Officer Jamie Dimon testifies in the U.S. House today, he will present himself as a champion of free-market capitalism in opposition to an overweening government. His position would be more convincing if his bank weren’t such a beneficiary of corporate welfare.

To be precise, JPMorgan receives a government subsidy worth about $14 billion a year, according to research published by the International Monetary Fund and our own analysis of bank balance sheets. The money helps the bank pay big salaries and bonuses. More important, it distorts markets, fueling crises such as the recent subprime-lending disaster and the sovereign-debt debacle that is now threatening to destroy the euro and sink the global economy.

How can all this be? Let’s take it step by step.