Kid Creole and the Coconuts

Kid Creole and the Coconuts ... finally 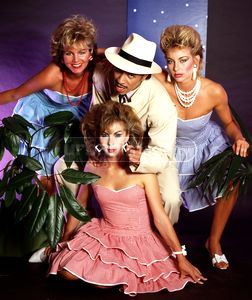 We've been looking for a very long time for some video that does justice to the jaw dropping magnificence that was/is Kid Creole and the Coconuts.

I still haven't found it but these two do offer up a taste.

The Kid and his band never sold well in States despite making a half dozen way sollid records that included a no kidding dozen tunes that should have been ... IMHO ... radio staples for the next 50 years, but they owned Europe in the 80's and continue to fill big rooms there to this day.

This is Band Leader, Record Producer, Songwriter and Frontman extraordinaire Thomas August Darnell Browder aka August Darnell aka Kid Creole on vocals and rhythm guitar, along with the bands Musical Director the lovely and talented Sugar Coated Andy Hernandez aka Coati Mundi on the vibraphone, timbales, boxing gloves, real ugly faces and all around hijinx.

The Coconuts, who don't happen to be appearing in this first vid are Choreographer Adreiana Kaegi aka Mama Coconut, probably Janique Svedberg but maybe Taryn Haegy and Cheryl Pointer, along with Peter Schott on keyboards, Carol Colman on the Bass, Mark Mazur playing guitar, Al Mackon on the drums, Bongo Eddie Folk on percussion, Charles Lagond on saxophone, Ken Fradley on trumpet, and Lee Robertson getting his star turn on trombone.

Easily among the very greatest showbands of all time, this is Kid Creole and the Cocounts in London, England, 1982.