Drive Through Manhattan after the Riots: All boarded up!

"Anywhere you see boards? The windows are gone."

I would think that a great deal of these boards were pre-emptive.

But it is, indisputeably, a real bad look for New York City.

Just who exactly did they intend to shoot?

Officers injured nine bystanders as they pursued gunman Jeffrey Johnson, who appeared to have just one intended target 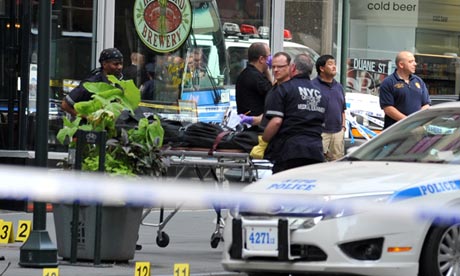 Questions have been raised over the New York police department's handling of a shooting near the Empire State Building after armed officers injured nine passers-by as they pursued a gunman who had just shot dead his former boss.

One of those injured by police told the Guardian that officers appeared to fire "randomly" as they confronted Jeffrey Johnson, 58, minutes after a workplace dispute escalated into a chaotic shootout in one of the busiest parts of Manhattan.

Reports suggest that while Johnson drew his gun when he was confronted by officers, he did not fire; all those injured appear to have been shot by police. The New York police commissioner, Raymond Kelly, said officers had no choice but to act as they did: police discharged 14 rounds and the gunman died at the scene.

The incident began just after 9am on Friday when Johnson, described as a "disgruntled former employee", walked up to Steve Ercolino, 41, his former manager at Hazan Imports, a business that operates from premises in Midtown, near the Empire State Building. Johnson shot him three times before calmly walking away.

A construction worker alterted two police officers stationed at the landmark. They appear to have attempted to stop Johnson, who dropped a bag and pulled out his gun, according to witnesses. In the ensuing shootout, Johnson died.

Panic soon ensued in the tourist-heavy streets around the Empire State Building, with fears that another mass shooting was under way. However, it became clear that it was not a random attack when police revealed the victim was targeted. Johnson had previously been fired from the business.

Robert Asika was among those wounded, shot in the elbow from a distance of around eight feet by one of the two police officers who confronted Johnson. He accused police of "shooting randomly", and said he saw at least two others hit by police bullets.