On this day in 1886, the first groundhog day was observed. 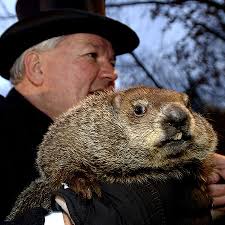 Groundhog Day is a driect descendent of

The celebration began in America with the descendents of German immagrants in central and southern Pennsylvania during the 18th century. It's origins are ancient and the date, Feb 2 is the seasonal turning point of the Celtic calender.

The official celebration began on February 2, 1866 when Clymer Freas, editor of the Punxutawney Spirit published the following comment, "Today is groundhog day and up to the time of going to press the beast has not seen it's shadow."

In his first recorded appearance, no shadow ..... early Spring.

If Candlemas be fair and bright,
Winter has another flight.
If Candlemas brings clouds and rain,
Winter will not come again.

If Candlemas Day is bright and clear,
There'll be two winters in the year.

He looks a little crabby over there.