I Was A Communist For The FBI

decided that Frederic March, John Garfield, Paul Muni, Paul Robson and Edward G. Robinson ... among others, were all members of the American Communist Party.

To quote Edward G. Robinson on the matter.

The FBI report relied largely on accusations made by “confidential informants".

and identified colleagues within the entertainment industry as "communists'.

Congress would later cite 10 Hollywood writers and directors for contempt for refusing to divulge their political sympathies or name others who might be communists. The “Hollywood Ten,”

as they came to be known, were later convicted and sent to prison for varying terms.

Eventually, more than 300 artists were blacklisted by the studios including

Charlie Chaplain, who had openly supported the Soviet Union during WWII.

Chaplain chose to return to England to work and subsequently had his re-entry permit revoked by US Attonrney General, James McGranary.

He never returned to this country.

Dalton Trumbo, proud member of the Hollywood Ten, admitted member of the Communist Party and passionate anti-war activist was later quoted as follows,

In an effort to give you a feel for the tone of the times, click the image below for one of my all time favorite movies,

I Was A Communist For The FBI.

in this billed as true story. 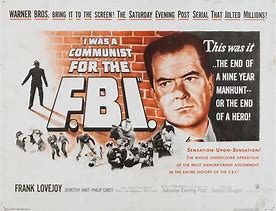 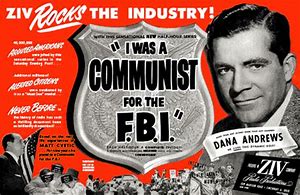