The single clearest metaphor we've seen yet on this mortgage thing.

Helga is the proprietor of a bar. She realizes that virtually all of her customers are unemployed alcoholics and, as such, can no longer afford to patronize her bar. To solve this problem, she comes up with a new marketing plan that allows her customers to drink now, but pay later. Helga keeps track of the drinks consumed on a ledger (thereby granting the customers’ loans).

Word gets around about Helga’s “drink now, pay later” marketing strategy and, as a result, increasing numbers of customers flood into Helga’s bar. Soon she has the largest sales volume for any bar in town.

By providing her customers freedom from immediate payment demands, Helga gets no resistance when, at regular intervals, she substantially increases her prices for wine and beer, the most consumed beverages.

A young and dynamic vice-president at the local bank recognizes that these customer debts constitute valuable future assets and increases Helga’s borrowing limit.

He sees no reason for any undue concern, since he has the debts of the unemployed alcoholics as collateral!!!

At the bank’s corporate headquarters, expert traders figure a way to make huge commissions, and transform these customer loans into DRINKBONDS.

These “securities” then are bundled and traded on international securities markets.

Naive investors don’t really understand that the securities being sold to them as “AA” “Secured Bonds” really are debts of unemployed alcoholics. Nevertheless, the bond prices continuously climb!!!, and the securities soon become the hottest-selling items for some of the nation’s leading brokerage houses.

One day, even though the bond prices still are climbing, a risk manager at the original local bank decides that the time has come to demand payment on the debts incurred by the drinkers at Helga’s bar. He so informs Helga. Helga then demands payment from her alcoholic patrons, but being unemployed alcoholics they cannot pay back their drinking debts.

Since Helga cannot fulfil her loan obligations she is forced into bankruptcy. The bar closes and Helga’s 11 employees lose their jobs.

Overnight, DRINKBOND prices drop by 90%. The collapsed bond asset value destroys the bank’s liquidity and prevents it from issuing new loans, thus freezing credit and economic activity in the community.

The suppliers of Helga’s bar had granted her generous payment extensions and had invested their firms’ pension funds in the BOND securities. They find they are now faced with having to write off her bad debt and with losing over 90% of the presumed value of the bonds.

Her wine supplier also claims bankruptcy, closing the doors on a family business that had endured for three generations, her beer supplier is taken over by a competitor, who immediately closes the local plant and lays off 150 workers. Fortunately though, the bank, the brokerage houses and their respective executives are saved and bailed out by a multibillion dollar no-strings attached cash infusion from the government.

The funds required for this bailout are obtained by new taxes levied on employed, middle-class, non-drinkers who have never been in Helga’s bar.

Now do we understand?

Basically he analyzes the history of transactions concerning a given mortgage and note from the moment it's signed through it's sale, securitization and hopeful payoff ................. or foreclosure.

Here's the chart for Dan's own mortgage.

I clicked on the small version and then again to enlarge it to it's full size, thinking I'd follow it all the way through it's history.

I'm not gonna lie to you, I quit after about three seconds.

I'm thinking now that this debacle has no chance of resolution outside of default, foreclose and bankruptcy, and by that I mean both individually and at the level of the subsequent securitized instruments.

On the positive side, it's free.

It is also consistently among the most rewarding of the sites I frequent if one is prepared to grind some.

Click the chart below for the Zero Hedge site and the story.

The sordid journey of just one mortgage. 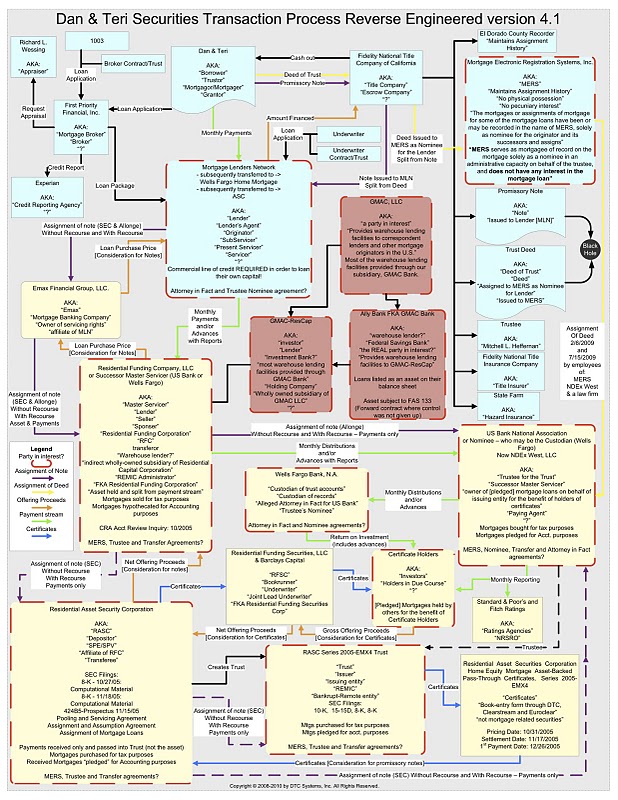 “So the Fed stopped buying Mortgage Backed Securities, and people are wondering if this will affect mortgage rates.

There's been plenty of whistling past the graveyard, guesswork and denial, where so-called experts have been trying to tell us that there will be minimal - if any - change to rates.

That pipe dream is just nonsense.

During the past fifteen months, the Fed purchased $1.25 Trillion in MBS, which represented 80% of the mortgage market.

Prior to this program, mortgage rates were above 6%.

Now that the Fed program has ended, it's reasonable to assume that mortgage rates will rise back towards those levels…

Downgrades in the sovereign debt of both and are a warning to the that the same can happen here, which would drive the cost of borrowing much higher.

Does anyone really believe that Treasury yields are headed lower?

As Treasury yields move higher from their current levels, mortgage backed security coupon yields will also need to move higher in order for investors to want to purchase them.

“When all the factors are considered - the chances of higher interest rates are a virtual lock.

And anyone in the market to borrow should consider acting sooner rather than later.

With such low rates still in our hands...and all these various factors pointing at the inevitable fact of rates moving higher.”