Einstein Gets It Right

This story has been flying around all day.

As you might well expect the best, which is to say clearest and easiest to understand comes from NASA.

As always click the drawing to read the entire piece.

Be smarter than your friends.

Einstein was right again. There is a space-time vortex around Earth, and its shape precisely matches the predictions of Einstein's theory of gravity.

Researchers confirmed these points at a press conference today at NASA headquarters where they announced the long-awaited results of Gravity Probe B (GP-B). 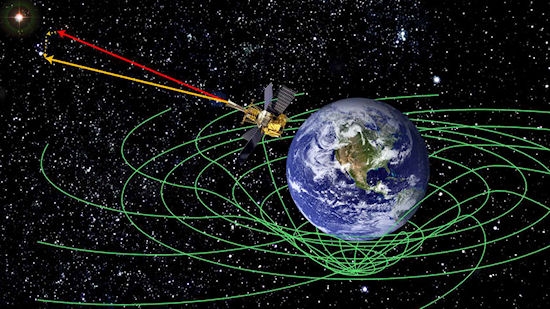 Time and space, according to Einstein's theories of relativity, are woven together, forming a four-dimensional fabric called "space-time." The mass of Earth dimples this fabric, much like a heavy person sitting in the middle of a trampoline. Gravity, says Einstein, is simply the motion of objects following the curvaceous lines of the dimple.