We have deemed our project to spruce up the site to have been a glorious success, as not one of you including even the most irascible among you, has contacted us to tell us how much they hate our every idea ..... at least as it applies to the decorating ..... yet.

And since we're practicing avoidance with regards to a couple of posts that either we have promised and have not yet completed, most notably a post on health care reform we promised Madelyn M. and ..... somebody else, or posts that are finished but are in truth so ugly to contemplate we'd just rather not for a while longer.

Here's a little more art to brighten your day.

The following are some photo's of the Court of Industry at the Detroit Institute of Arts.

with the unbending support of that well known capitalist, industrialist and rich white guy,

Edsel Ford, painted one of the greatest works of the 20th century on the walls of the Detroit Institute of Arts.

And while the caca did indeed hit the fan,

fortunately none of it got on the mural.

Click each image for the DIA's wonderful interactive on each of the four walls holding the 27 panels that comprise this treasure. 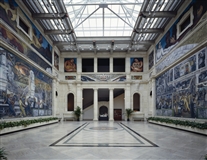