Manipulation of the Gold Market?

This one might be a bit obscure for those of you that don't trade, still if you can get your mind around the idea of "selling short" Gold you don't have via futures contracts or options and then buying the stuff back in order to make whole or reconcile your position, it should ... OK, Ok maybe could ... fall into place.

It is now being bandied about as evidence

of manipulation of the gold markets.

The first chart from

Kitco is for the daily closing price of Gold or "PM fix" from January 2002 until January 2012 on the Comex, located in New York City and demonstrates what I consider to be just a wonderful upward sloping trendline.

Starting in 2001 with an index arbitrarily set at 100, the chart below shows what would have happened to that investment of 100 whatevers if it had been used to purchase Gold daily at the AM fix on the Comex in New York City and subsequently sell that Gold daily at the PM fix again in New York City on the Comex, replicating the daily percentage performance of Gold in the U.S. intraday market.

What you need to keep in mind here is that the morning fix on the Comex is seldom if ever the same as the previous evening's fix.

This is true of most markets and every exchange.

What this chart is telling you is that had you taken $100,000 and invested it all daily by purchasing Gold to the maximum you were able at the morning fix and subsequently selling all of it back at the evening fix, beginning January 1, 2001, your account would have been reduced to somewhere around $32,000 on or about March 1, 2012. 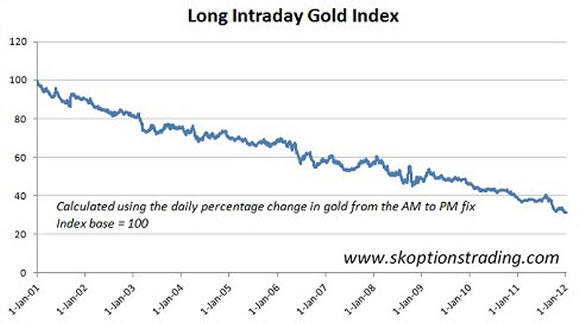 The red line demonstrates the gains you would have enjoyed employing a buy and hold strategy if you had purchased and held some amount of Gold on Jan 1, 2001 again arbitrarily set at 100, and held it through March 2012.

Buy at night, sell in the morning, go short with the proceeds then close your short position at the evening close and using the proceeds from that trade repeat the whole process. 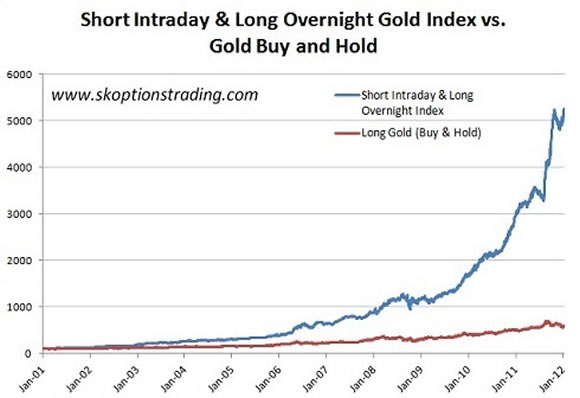 Gold goes up all over the world while we sleep and goes down in New York when we're open for business.

It's a fascinating world we live in.