In early August 1969, two weeks before the Woodstock Arts and Music Festival was held on Max Yasgur's farm in upstate New York, approximately 20,000 music lovers showed up at Fuller Field (I think) on the banks of the mighty Huron River in Ann Arbor, Michigan to hear B. B. King, Muddy Waters, Howlin' Wolf, Otis Rush, Big Mama Thornton, Son House, T-Bone Walker and Lightnin' Hopkins among others, play the blues at the first Ann Arbor Blues Festival. 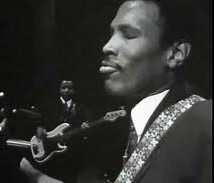 I didn't happen to be there as I didn't even know it was happening until after it was over.

I dunno what happened on that one.

The comparatively unknown Magic Sam was scheduled to take the stage at 3 PM Sunday afternoon but was late, forcing Charles Musselwhite to the stage an hour early.

When he finally arrived he had no band.

He took the stage that afternoon with Paul "Buffalo" Bruce Barlow from Commander Cody and His Lost Planet Airmen on the bass guitar and future, veteran Chicago blues session man Sam Lay on drums and proceeded to kick ass.

When he walked off that stage about an hour later, he was a star.

buy, this is the great Magic Sam on vocals and Earl Hooker's Les Paul guitar, Mack Thompson on bass guitar and Robert St. Julien playing the drums with his wallet on the snare to deaden it just a tad.

All Your Love and Lookin Good.