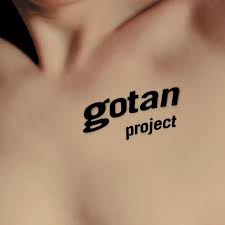 Our post of Bajofondo performing Pa'Bailar inspired a number emails the subject of which can be summed up as follows.

Why not Gotan Project?

We're wwaaaayyyy ahead of all of you as we had mostly completed a post for each back to back and then had flipped for who went first.

Gotan Project are/is Eduardo Makaroff on guitar, Phillippe Cohen Solal on keyboards and bass, Christophe H. Muller programming beats along with bass and keyboards.  They are accompanied in this performance by Mini Flores on

bandoneon, Cristina Vilallonga vocals, Gustavo Beytelmann on the piano, Line Kruse (along with two others I can't identify ... apologies) on violins, Fabrizio Genoglietto on the upright bass and Edi Tomassi on percussion.

From their 2006 performance on Later with Jools Holland.