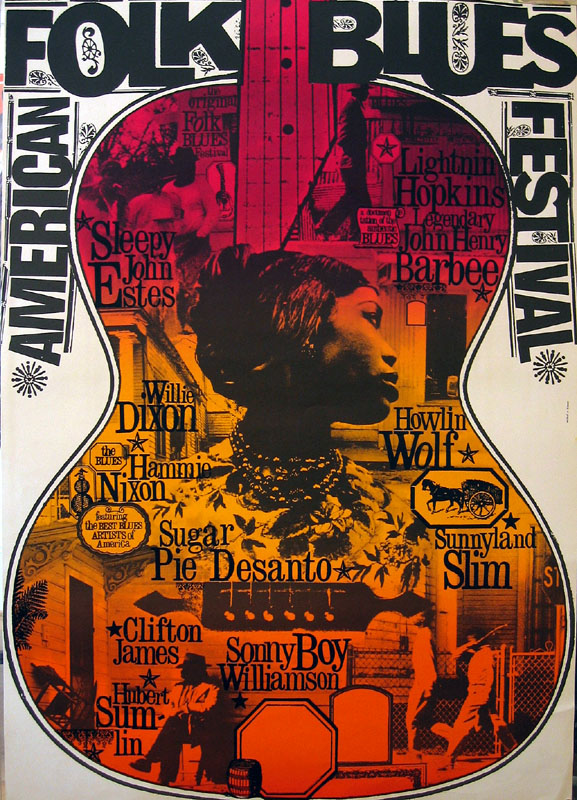 Jazz having become very popular in Europe, and with rock and roll just beginning to gain a foothold there, the fact that both genres drew influences from the blues caused Berendt to think that European audiences would jump at the chance to see live performances by American blues artists.

Promoters Horst Lippmann and Fritz Rau brought Berendt’s idea to fruition by entering into a relationship with the great Willie Dixon that would enable them to book the greatest and most influential of America’s blues musicians.

It continued mostly annually until 1972.

During the course of these tours, Lippman and Rau were able to arrange very high quality, live in the studio performances by these great artists for German television.

One of which follows here.

Famed German poster artist Gunther Kieser did the poster art and show bills for the 1964 tour from which the following performance was taken.

Click on the poster to link up to Amazon’s offering of Reelin in the Years Productions’ DVD collection of these historic performances.

Here’s the great Chester Burnett, also know as Howlin' Wolf on vocals and accoustic guitar, the equally great Hubert Sumlin on the electric guitar, Sunnyland Slim on piano, along with Willie Dixon (who you never see) playing bass, with an introduction from what appears to be a fairly well buzzed Mae Mercer.