The following was taken from the

With a minimal amount of flight instruction, you too can be flying back to the marina.

Raymond Li, a Chinese-born Canadian from St. John’s Newfoundland, first sketched out his JetLev concept on a yellow Post-it Note in 2000. After seeing his masterpiece on paper for the first time, Ray unceremoniously retreated, filing it under I for Impossible by burying it in the trash. 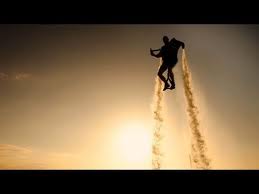 With assistance from the National Research Council of Canada in 2004, JetLev kicked into high gear and Ray conducted a series of unmanned flight tests.

The first fully operational JetLev prototype was completed in August 2008.  A few months later, various clips from these test flights leaked online and went viral, surfacing on a variety of video sharing websites.

From 2009 to 2011, development continued and Ray and his team worked to perfect the prototype.

Finally, a model was ready for commercial production.