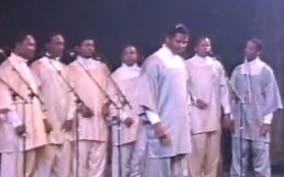 Which is to say about a continent, if not two maybe three ..... depending on which way you're travelling.

It all kind of made sense as it was happening.

This is Ladysmith Black Mombazo in 1990 who have had so many guys go through the group that I'm not even going to try to identify this particular batch except to say that that's Joseph Shabalala out front.

They are appearing here with The Mint Juleps, who are Sandra, Debbie, Lizzie, and Marcia Charles along with Julie Isaac and Debbie Longworth.