"The way I think about it is this is a great, great country that had gotten a little soft, and we didn't have that same competitive edge we needed over the last couple of decades."    President Barack Obama

"Seriously, in 2008 we elected a community organizer, state senator, college instructor first term senator over a guy who spent five years in a Vietnamese prison. And now he's lecturing us about how America's gone 'soft'?   Really?"    Jonah Goldberg 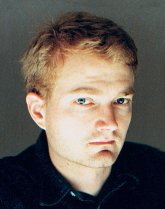 Young adults born in the 1980s and early 1990s leaped out of nicotine- and alcohol-free wombs to be deemed geniuses every time they passed a test, awarded trophies every time they caught a ball and tucked into comfy car seats on the victory ride over to their favorite sushi palace.

They took groovy public-service internships at an age when their grandfathers were sweating on assembly lines or being shot at by Nazis, lived with their parents until they were 28, then proceeded directly to their shrinks for marathon weeping sessions every time they messed up a project at work.

They’re as soft as pudding, and they know it. The Greatest Generation didn’t need triathlons or X-treme skateboarding; every Friday night was a thrill ride after manual labor and eight Schlitzes.

From Kyle Smith, film critic at the New York Post.

Ckick on the above photo for his personal blog.