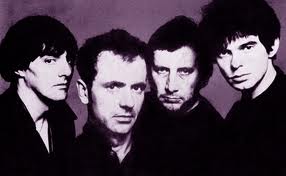 A little late for the "Pub Rock" scene, and a little old for the Punks, The Stranglers didn't quite fit in with anybody.

They liked it that way and took perverse delight in confusing everybody.

They were arrested at least twice for brawling or inciting a brawl during a show.

They kidnapped a writer.

Then having heard that the BBC was expecting them to trash their dressing room after a Top of the Pops appearence, they showed up with cleaning supplies and tidied up a bit.

The scored 20+ UK top forty singles, maybe 12 or 15 Uk top forty albums, but were never able to rise much above "cult status" in the US.

Having begun their career as an in your face Punk and Roll band, thirty years later The Stranglers have reinvented themselves at least two or three times and can boast a catalogue as rich, powerful and diverse as any of the great bands you might care to name.

This is Jet Black on drums, Dave Greenfield on keyboards, J. J. Burnel on bass and Hugh Cornwell on guitar and vocals.

There is nothing in this life like a great band in a small room, and damn few things as good.

I got to see The Stranglers twice.

My favorite was Toronto.

I went up there by myself because nobody I knew was the least bit interested.

I had found a girl that wanted to dance just before they broke into Down in the Sewer and took a look around the room from the little spot where we were dancing about the time Hugh Cornwell was finishing his vocals.

As an aside, I hesitate to call what it is that Hugh Cornwall does on this song, singing.

You'll see what I mean.

All you could see was backs rising and falling with the music.

The other half were just bopping in place, totally mesmerized.

Down in the Sewer.

How'd I get down here?