Make your own deficit-reduction plan

The Wall Street Journal posted a nice interactive which allows you to implement your own deficit reduction plan.

We played and are running a $5 billion surplus. 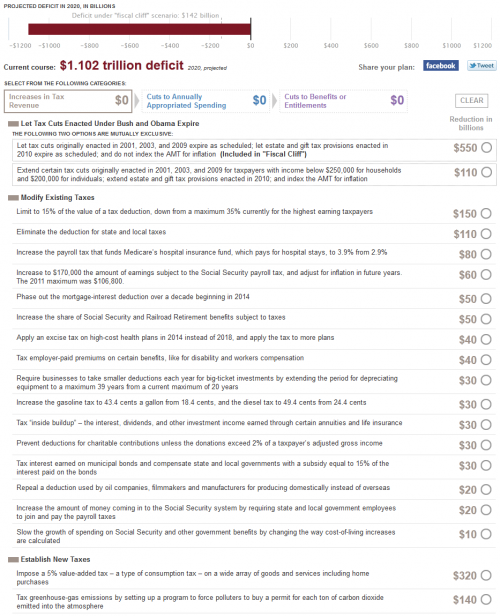 In five minutes and thirty eight seconds, the single best analysis of the federal budget deficit anybody around here has ever seen.

And we've been looking.

is, he's my new personal hero.

Half the trade deficit is oil

Chart of the Day.

Click the chart for a very simple analysis of the numbers.

Blue is the total trade deficit.

Red is the trade deficit minus petrolium. 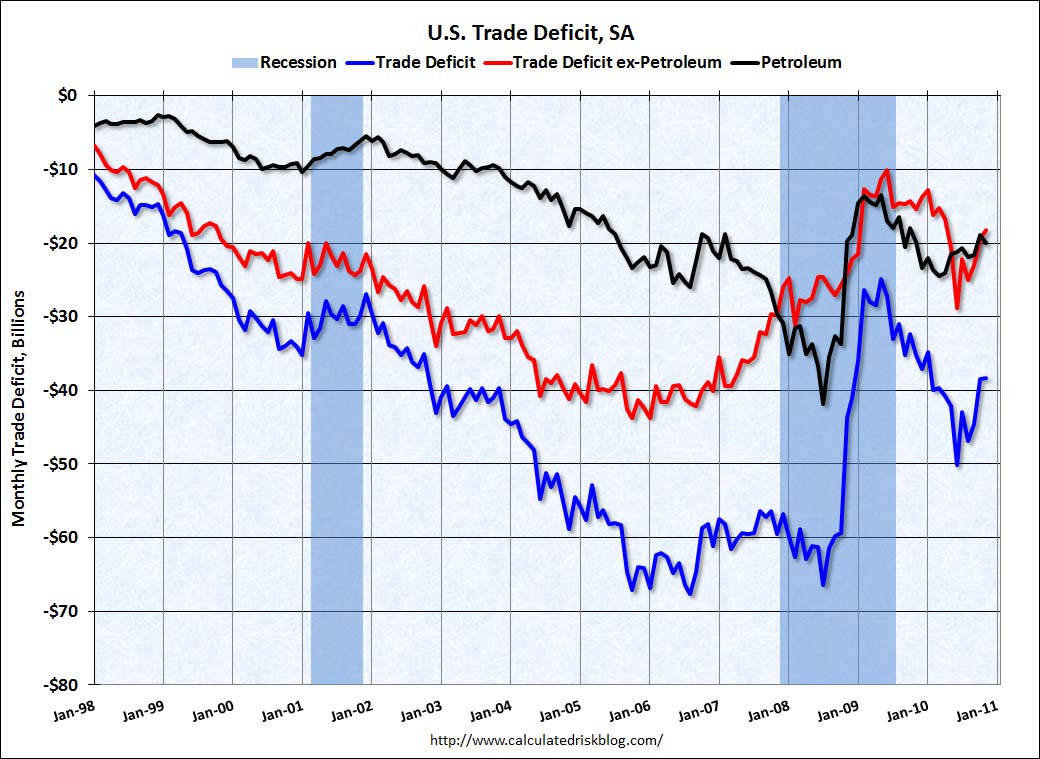 …"Like gold, U.S. dollars have value only to the extent that they are strictly limited in supply.

But the U.S. government has a technology, called a printing press (or, today, its electronic equivalent), that allows it to produce as many U.S. dollars as it wishes at essentially no cost.

By increasing the number of U.S. dollars in circulation, or even by credibly threatening to do so, the U.S. government can also reduce the value of a dollar in terms of goods and services, which is equivalent to raising the prices in dollars of those goods and services.

We conclude that, under a paper-money system, a determined government can always generate higher spending and hence positive inflation."

"But paper money has always been a con game based on belief.
Neither the emperors of Rome, the Kings of France and England, or the chairmen of the Federal Reserve have been able to resist debasing the currency.
It makes both warfare and welfare possible.
Guns and butter are the health of the state and the death of sound money.
The counterfeiters always get first use of the bogus money before its purchasing power is diminished by the increased supply.
This is a pretty dodgy way to run a world economy.
But the assumption – encouraged by the powers that be – is that the an economy can be controlled with the right tweaks to the right dials by the right people wearing the right suits in the right government offices with the right university degrees".

To quote that no good, slave owning Thomas Jefferson, yet again

The following are just some of the items within the President's proposed 2011 budget:

Provides a $3 billion increase in K-12 education programs, plus up to $1 billion in additional
funding if Congress successfully completes a fundamental overhaul of the Elementary and
Secondary Education Act (ESEA). Together, these measures would represent the largest
funding increase for ESEA programs ever requested.

Provides $1.35 billion to expand Race to the Top for school districts as well as States to carry
out systemic reform, and $500 million to continue the Investing in Innovation program to test,
validate, and scales up effective approaches to student learning.

Provides $429 million, the highest funding level ever, for competitive grants through the
Agriculture and Food Research Initiative.

Provides $7.4 billion for the National Science Foundation, an 8 percent increase over the
2010 enacted level, as part of the President’s Plan for Science and Innovation.

Drives the creation of the industries and jobs of the future by doubling funding for
multidisciplinary research targeted at next-generation information and biological technologies.

Provides $19 million in graduate and undergraduate fellowships and scholarships for a joint
initiative with the Department of Energy to inspire tens of thousands of American students to
pursue careers in science, engineering, and entrepreneurship related to clean energy.

Increases funding by 14 percent for a new consolidated program aimed at building the
science and technology workforce by recruiting and retaining undergraduate students from
under-represented groups.

Adds $6 billion to NASA’s budget over five years and draws upon American ingenuity to
enable us to embark on an ambitious 21st Century program of human space exploration.

Provides grants for States and Tribes to administer delegated environmental programs at $1.3
billion, the highest level ever.

Builds on the historic past increase in funding for the Department of Veterans Affairs (VA), for
a 20 percent total increase since 2009.

Invests over $8 billion in the Internal Revenue Service’s enforcement and modernization
programs, while continuing to drive innovation and responsiveness in taxpayer services. The
Budget supports significant new revenue-generating initiatives that will target critical areas of
non-compliance, and enhances a multi-year modernization strategy that will deliver a vastly
improved IRS within the next five years.

Provides $4 billion for a new National Infrastructure Innovation and Finance Fund, which will
invest in high-value projects of regional or national significance.

Invests in modernizing the air traffic control system by increasing funding for NextGen by
more than 30 percent.

Helps communities to become more livable and sustainable by allocating $527 million for the
Department’s investments as part of the President’s multi-agency Partnership for Sustainable
Communities.

Increases funding for the President’s Global Health Initiative, including increased efforts to
reduce mortality of mothers and children under five, avoid unintended pregnancies, and work
towards the elimination of some neglected tropical diseases. As part of this effort, the Budget
also expands support for the President’s Emergency Plan for AIDS Relief to prevent new HIV
infections while providing care and treatment to millions of people, and for the President’s
Malaria Initiative to dramatically reduce the prevalence of this disease.

Increases funding for the President’s Global Hunger and Food Security Initiative to help poor
countries improve the nutritional and income status of millions of people living in extreme
poverty and suffering from hunger by 2015.

Increases aid to Afghanistan and Pakistan to revitalize economic development and confront
the resurgence of the Taliban.

Continues to strengthen and expand local law enforcement agencies by providing $600 million
as part of the President’s multi-year commitment to fund the hiring of 50,000 additional police
officers nationwide.
Steps up the effort to combat financial fraud and protect public investments in our Nation’s
financial stability.
Expands targeted, place-based efforts to combat violent crime.
Strengthens efforts to combat violence against women by providing $538 million, an increase of 29 percent.

There is no nice way to say it.

WASHINGTON, September 29, 1999  In a move that could help increase home ownership rates among minorities and low-income consumers, the Fannie Mae Corporation is easing the credit requirements on loans that it will purchase from banks and other lenders.

The action, which will begin as a pilot program involving 24 banks in 15 markets -- including the New York metropolitan region -- will encourage those banks to extend home mortgages to individuals whose credit is generally not good enough to qualify for conventional loans. Fannie Mae officials say they hope to make it a nationwide program by next spring.

U.S. Lifts Limit On Aid To Fannie, Freddie
by THE ASSOCIATED PRESS December 25, 2009

The Treasury Department said it has removed the $400 billion cap on the money it will provide to keep beleaguered mortgage giants Fannie Mae and Freddie Mac afloat. The news followed an announcement Thursday that the CEOs of Fannie and Freddie could get paid as much as $6 million for 2009, despite the companies' dismal performances this year.

Already, taxpayers have shelled out $111 billion to the pair, and a senior Treasury official said losses are not expected to exceed the government's estimate this summer of $170 billion over 10 years.