Reading in the Middle of the Night

Fred Reed at Fred On Everything

is back with an essay on Mexico and drugs.

If Mexico were not next to the world’s most ravening drug market, it would be a corrupt, but functioning and reasonably successful upper Third-World country.

If this were not so, Mexico would not have the huge number of American who have come here to retire.

But the country cannot withstand a drug business that, by a common figure, brings the traffickers forty billion dollars a year.

The money means that the cartels can buy heavier armament than can the government, as well as buy heavier officials on either side of the border.

(It is an American conceit that corruption exists only in other countries.)

Ebonics, which is also known as African American Vernacular English, has been described by the psychologist who coined the term as the combination of English vocabulary with African language structure.

Stratfor Global Intelligence is in my opinion among the better international news sites.

At about $30 a month, it's probably not worth it to most folks.

They have a one week trial deal.

From an article titled,

"Mexico a Struggle for Balance"

“…Mexico was nearing the status of a failed state.

A failed state is one in which the central government has lost control over significant areas of the country and the state is unable to function.

In revisiting this issue, it seems to us that the Mexican government has lost control of the northern tier of Mexico to drug-smuggling organizations, which have significantly greater power in that region than government forces.

“…The consumes vast amounts of narcotics, which, while illegal there, make their way in abundance. 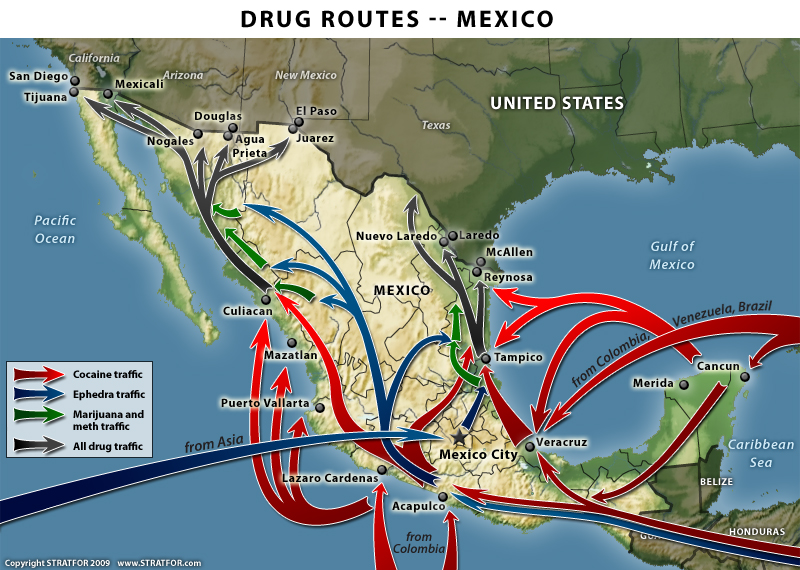 With its long, shared border with the , has become a major grower, processor and exporter of narcotics.

Because the drugs are illegal and thus outside normal market processes, their price is determined by their illegality rather than by the cost of production.

The result is ongoing warfare between competing organizations…

Membership in such paramilitary groups offers impoverished young men extraordinary opportunities for making money, far greater than would be available to them in legitimate activities…

“Indeed, what the wars are being fought over in some ways benefits .

The amount of money pouring into annually is stunning. It is estimated to be about $35 billion to $40 billion each year…

From 's point of view, interrupting the flow of drugs to the is not clearly in the national interest or in that of the economic elite…

Alright, here's the story.
Evidence of the smoking of cannabis can be found as far back as the

Neolithic age, where charred hemp seeds were found in a ritual brazier at a burial site in present day Romania.
The opium poppy

is thought to have first been cultivated in Mesopotamia c. 3400 B.C.
In ancient times, South American natives used coca

for religious and medicinal purposes.

Spanish conquistadors introduced coca to Europe, where it was used only occasionally until the 19th Century.
The history of Cannabis

extends so far back into time, it's cultivation may legitimately contend for the title "Worlds Oldest Profession."
America's first drug law was enacted at Jamestown Colony, Virginia in 1619.  It was a "must grow" law ordering all farmers to grow marijuana (or Indian hempseed, as it was called).  Some farmers were jailed for not growing hemp during the nation's hemp shortage of 1763-1767, and during that time, hemp was legal tender (you could pay your taxes with hemp).  Hemp was considered a critical crop primarily because it made excellent rope material.  The US Census of 1850 counted 8,327 hemp plantations growing the plant for rope, cloth, canvas and the cordage used in baling cotton.
Thomas Jefferson cultivated

opium poppies at his garden in

Monticello. The seeds from its plants, including the poppies, were sold at the gift-shop of Thomas Jefferson Center for Historic Plants until 1991 - when a drug-bust at the nearby University of Virginia panicked the Board of Directors into ripping up the plants and burning the seeds.
Opium was legally available for purchase at low prices from physicians, pharmacies, grocery,  general stores, mail order, and in countless patent medicines.

in the 1830's Great Britain was the leading drug trafficker in the world.  Growing it's own opium in India, the East India Company shipped tons of opium into China in exchange for tea, and Chinese manufactured goods.  This trade continued despite being made illegal by the Chinese in 1836 by virtue of generous bribes made to Chinese officials.  Faced with millions of opium addicts throughout the country, the Chinese cracked down both on the use of, and illegal import of opium, much to the displeasure of the British, who despite having made opium trade and consumption illegal in England because of it's known harmful effects, were enjoying the profits from their trade in it with the Chinese.  The resultant friction between the two countries led to The Opium War in 1839.

Opium addiction in America during the late 19th century was rampant.

In America prior to 1890, laws concerning opiates were strictly imposed on a local city or state-by-state basis. One of the first was in San Francisco in 1875 where it became illegal to smoke opium in opium dens, it did not ban the sale, import or use otherwise. In the next 25 years different states enacted opium laws ranging from outlawing opium dens altogether to making possession of opium, morphine and heroin without a physician’s prescription illegal.

The first Congressional Act took place in 1890 that levied taxes on morphine and opium. From that time on the Federal Government has had a series of laws and acts directly aimed at opiate use, abuse and control.
The active ingredient of the coca plant was first isolated in 1859.
In 1863, the coca wine

Vin Mariani went on sale throughout France. It contained 6 mg cocaine per ounce of wine in France, but exported Vin Mariani contained 7.2 mg per ounce to compete with the higher cocaine content of American competitors.
Coca-Cola

was introduced in 1886 and was promoted as a temperance drink "offering the virtues of coca without the vices of alcohol." Until 1903, a typical serving contained around 60mg of cocaine. The new beverage was invigorating and popular. Today, Coca-Cola is still flavored with an extract of coca-leaves, but contains none of the drug itself.
Cocaine was also sold over-the-counter. Until 1914, one could buy it at department stores. It was widely used in tonics, toothache cures and patent medicines, and in chocolate cocaine tablets.
In 1906, the Pure Food & Drug Act forced the patent medicine industry to list on the label the presence of certain dangerous drugs such as alcohol, opiates, cocaine, and cannabis.
The

Anti Saloon League was founded in Oberlin Ohio in 1893.  In two short years it had gown into powerful, national, single issue organization.  Having allied itself with churches across the nation, as well as the Women's Christian Temperance Union,

the Anti Saloon League announced its campaign to achieve national prohibition of alcohol by means of a constitutional amendment.  In 1916 it achieved the two-thirds majority in both Houses of Congress required to pass the Eighteenth Amendment to the Constitution.
Ratified and made operative 1/16/19 by the 18th Amendment

and repealed 12/5/33 by the 21st Amendment to the Constitution "The Noble Experiment", Prohibition

is mostly conceded to have failed miserably.  While

The drug now known as amphetamine was first synthesized in Germany in 1887.  Medical uses were not discovered until 1927, when its effectiveness in raising blood pressure, as well as its effects in enlarging the nasal and bronchial passages and in stimulating the central nervous system were discovered. The drug was accordingly marketed in 1932, under the trade name Benzedrine.

Methamphetamine, more potent and easy to make, was discovered in Japan in 1919. The crystalline powder is still legally produced in the U.S., and sold under the trade name Desoxyn.

Lysergic acid diethylamide, or LSD-25 (being the twenty-fifth substance in a series of lysergic acid derivatives) was synthesized by Albert Hoffman in 1938.
In April of 1943, Dr. Hoffman reported the following experience, "I was forced to interrupt my work in the laboratory in the middle of the afternoon and proceed home, being affected by a remarkable restlessness, combined with a slight dizziness.  At home I lay down and sank into a not unpleasant intoxicated-like condition, characterized by an extremely stimulated imagination. In a dreamlike state, with eyes closed (I found the daylight to be unpleasantly glaring), I perceived an uninterrupted stream of fantastic pictures, extraordinary shapes with intense, kaleidoscopic play of colors.  After some two hours this condition faded away."
Whoa !!!!!
Dr. Hoffman subsequently performed numerous experiments in which he ingested and reported on the effects of the drug.  As an aside, he celebrated his one hundredth birthday January 11, 2006 together with his children, Benson

Abbie. (Kidding)
The Federal Bureau of Narcotics was formed in 1930.  Its first commissioner Henry J. Anslinger and many of its agents were veterans of various agencies and departments charged with enforcing Prohibition.  The agency lobbied for the Marijuana Tax Act of 1937 (you really ought to read the testimony) which effectively criminalized the sale of Cannabis.  It was merged with the Bureau of Drug Abuse control to form the Bureau of Narcotics and Dangerous Drugs in 1968, which was subsequently merged into the newly formed Drug Enforcement Administration

(DEA) in 1973.
The Single Convention on Narcotic Drugs

Controlled Substances Act was enacted into law in 1970, and has subsequently

Then, just to be safe,

from illegal drug trafficking have also grown exponentially, with no

Research abounds.
The estimated number of arrests for drug abuse violations for adults has been increasing, while the number for juveniles stabilized.

In 2002 about a quarter of convicted property and drug offenders had committed their crimes to get money for drugs, compared to 5% of violent and public order offenders.  In 1997, 19% of State prisoners and 16% of Federal inmates said they committed their current offense to obtain money for drugs. These percentages represent a slight increase from 1991, when 17% of State and 10% of Federal prisoners identified drug money as a motive for their current offense.  The Uniform Crime Reporting Program (UCR) of the Federal Bureau of Investigation (FBI) reported that in 2005, 4.0% of the 14,860 homicides in which circumstances were known were narcotics related.  Murders that occurred specifically during a narcotics felony, such as drug trafficking or manufacturing, are considered drug related.

once famously said, "We don't seem to be able to check crime, so why not legalize it and then

tax it out of business."