Professor Bill Black tells it like it is ... was 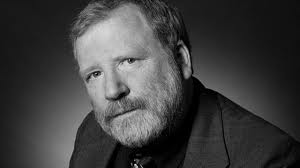 The following is Professor William Black's testimony to the House Financial Services Committee's hearing on the failure of Lehman Brothers in 2008.

Professor Black's qualifications which are about as long as your right arm, can be found here

The following is an interview with Professor Black on the street in New York City during the Occupy Wall Street happening this past fall wherein he discusses having put over 1000 banksters in jail during the 1980's Savings and Loan meltdown, and the cause (not causes) of our present issues .....

Very good stuff, you should watch it.

with Bill Moyers who is one of the only mainstream journalist paying any attention to the pervasive corruption that is Wall Street and Washington DC.

Your government at work for the banks

From Bloomberg News who had to go to court with the Fed and a consortium of banks in order to obtain the following story under the Freedom of Information Act.

Click on the photo below of Goldman Sachs' personal bag boys for the entire story.

Way super double highly recommended ... READ IT ... you need to understand this stuff. 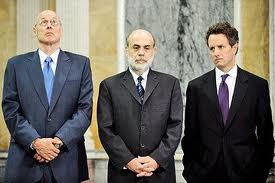 The Federal Reserve and the big banks fought for more than two years to keep details of the largest bailout in U.S. history a secret. Now, the rest of the world can see what it was missing.

The Fed didn’t tell anyone which banks were in trouble so deep they required a combined $1.2 trillion on Dec. 5, 2008, their single neediest day. Bankers didn’t mention that they took tens of billions of dollars in emergency loans at the same time they were assuring investors their firms were healthy. And no one calculated until now that banks reaped an estimated $13 billion of income by taking advantage of the Fed’s below-market rates, Bloomberg Markets magazine reports in its January issue.

Saved by the bailout, bankers lobbied against government regulations, a job made easier by the Fed, which never disclosed the details of the rescue to lawmakers even as Congress doled out more money and debated new rules aimed at preventing the next collapse.

A fresh narrative of the financial crisis of 2007 to 2009 emerges from 29,000 pages of Fed documents obtained under the Freedom of Information Act and central bank records of more than 21,000 transactions. While Fed officials say that almost all of the loans were repaid and there have been no losses, details suggest taxpayers paid a price beyond dollars as the secret funding helped preserve a broken status quo and enabled the biggest banks to grow even bigger.

What really irritates me about all of this is the fact that I could have gone and got that MBA, maybe a JD, moved to New York and become a thief, but noooooo.

Friends have forwarded the occasional copy or link for a while now.

Membership went on sale recently so I signed up.

As yet, I have no opinion.

The quote below links to the signup page.

“What Obama and his toadies have repeatedly demonstrated themselves to be is fascist.

Fascism is the most simple-minded of all political philosophies, it boils down to just 16 words:

Power holders should do whatever appears necessary, no exceptions, no limits, and no definition of necessary…

They are all loose cannons…

Fascism has no plan, it is 100% pragmatic, a fire fighting mentality, not an agenda mentality.

Its only answer to any problem is, more government...

Let me emphasize, the government’s top people are not constrained by ideology…the comment by the Director of National Intelligence, that US officials have the right to kill — without a trial — American citizens they suspect of terrorism.

If these people will do that, they will do anything. They are already across the final line.

“We should expect them to inflate the money supply to whatever extent they believe necessary, no limits.

Remember, however, that I am not saying the precious metals will rise this much, I’m saying the dollar will fall this much.”