The Blasters and Hollywood Fats

Ever wonder what's the big deal about Hollywood Fats?

Ever even heard of Hollywood Fats? 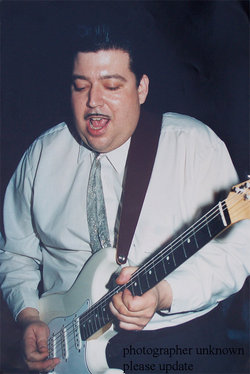 Thought by some to be the greatest blues guitarist of them all, Michael Mann suffered the distinct misfortune of coming of age during a time of declining popularity for the Blues and then lost his life at the age of 32 long before getting his shot at another Blues revival.

Legend has it he was playing with Buddy Guy and Junior Wells before he turned 14. He worked with John Lee Hooker, J. B. Hutto and Albert King who fired him because he was too good.  He was on the road touring with Muddy Waters before he turned 20, maybe 18.

He recorded some sides both with/as the Hollywood Fats Band and Hollywood Fats and the Paladins all of which were very good but not earth shaking ... at least to my ears.

Finally when Dave Alvin left The Blaster's to become the "Godfather of Americana" or the "King of California" take your pick, Fats took over the lead guitar position and .....

The second time you listen to this, check out the tone, so perfectly crunchy and snarly at the same time.

Feel the power in his rhythm as he locks up the bass and drums and then walks them up into a whole new gear.

Listen for the little two bar fills into and out of both the verse and the chorus that perfectly frame Phil Alvin's vocals.

Finally, check out the look on Phil Alvin's face and know that he knows that what's going on here is very, very hard to come by.

This is Phil Alvin singing like only Phil Alvin can, Lee Allen on the saxaphone, John Bazz playing the bass guitar, Bill Bateman on the drums, and the legendary Michael Mann aka Hollywood Fats on lead guitar.

Rock and Roll Will Stand.

59 years old and it still grabs me by the heart.