As always click on the photo to link up with the entire piece. 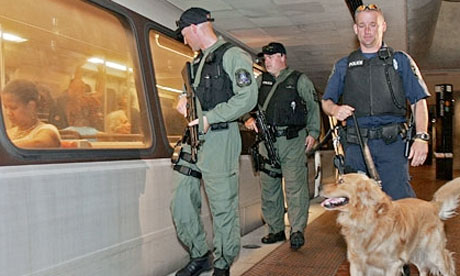 Ever since 2010, when the Transportation Security Administration started requiring that travelers in American airports submit to sexually intrusive gropings based on the apparent anti-terrorism principle that "If we can't feel your nipples, they must be a bomb", the agency's craven apologists have shouted down all constitutional or human rights objections with the mantra "If you don't like it, don't fly!"

This callous disregard for travelers' rights merely paraphrases the words of Homeland Security director Janet Napolitano, who shares, with the president, ultimate responsibility for all TSA travesties since 2009. In November 2010, with the groping policy only a few weeks old, Napolitano dismissed complaints by saying "people [who] want to travel by some other means" have that right. (In other words: if you don't like it, don't fly.)

But now TSA is invading travel by other means, too. No surprise, really: as soon as she established groping in airports, Napolitano expressed her desire to expand TSA jurisdiction over all forms of mass transit. In the past year, TSA's snakelike VIPR (Visual Intermodal Prevention and Response) teams have been slithering into more and more bus and train stations – and even running checkpoints on highways – never in response to actual threats, but apparently more in an attempt to live up to theinspirational motto displayed at the TSA's air marshal training centersince the agency's inception: "Dominate. Intimidate. Control."

Anyone who rode the bus in Houston, Texas during the 2-10pm shift last Friday faced random bag checks and sweeps by both drug-sniffing dogs and bomb-sniffing dogs (the latter being only canines necessary if "preventing terrorism" were the actual intent of these raids), all courtesy of a joint effort between TSA VIPR nests and three different local and county-level police departments. The new Napolitano doctrine, then: "Show us your papers, show us everything you've got, justify yourself or you're not allowed to go about your everyday business."

Congresswoman Sheila Jackson-Lee praised these violations of her constituents' rights with an explanation asinine even by congressional standards:

"We're looking to make sure that the lady I saw walking with a cane … knows that Metro cares as much about her as we do about building the light rail."

See, if you don't support the random harassment of ordinary people riding the bus to work, you're a callous bastard who doesn't care about little old ladies.