But not getting around to posting until much later.

We've posted on the nature of America's "defense" spending on a couple of occasions, most notably here

Here's a little something from the Financial Times.

As always, clicking on the map will take you to the article from which this image was taken.

My favorite sentence from this piece reads as follows:

"US officials acknowledge that its record is mixed and calibrating the extent to which they get involved will remain a delicate balancing act." 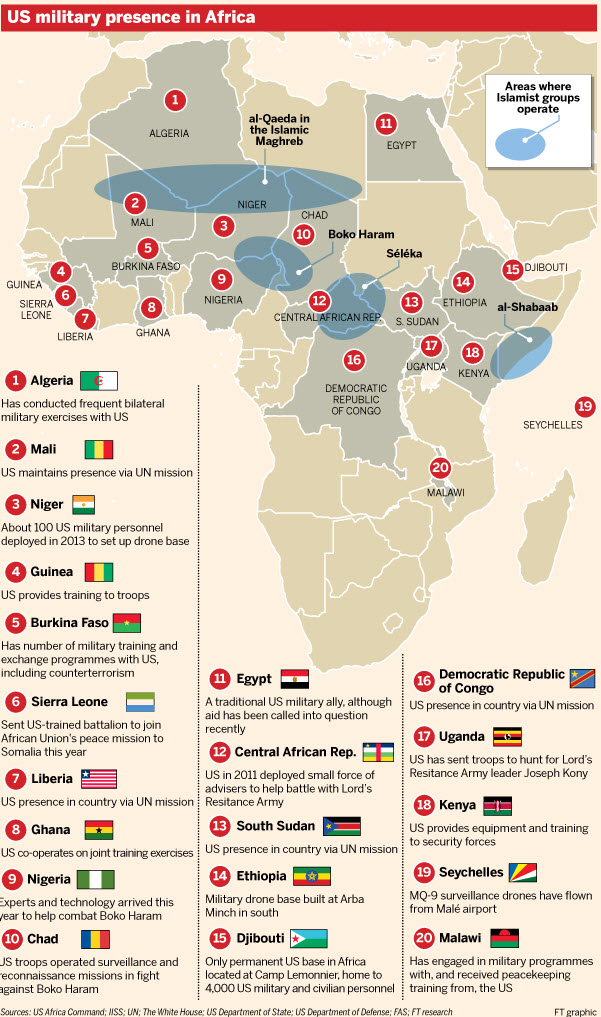 The stock in trade explanation for the practice of stationing American military personel for all practical purposes the length and width of Africa is nicely summarized by this piece by Republican United States Representative Will Hurd of Texas on CNBC in the winter of 2016 and in response to the atrocity at the Pulse night club in Orlando, Florida.

"The unfortunate reality is that the terrorist threat is not going away any time soon, and increased dramatically when countries like Iraq, Syria, and Libya destabilized. This was a direct result of the U.S.'s decision to slowly pull away from our global responsibilities over the past eight years.

ISIS took advantage of a crumbling Syria, which we did little to stop. They took over the city of Fallujah in Iraq in January 2014, and President Obama discounted the threat they posed. If there's anything we should take away from the Obama administration's tenure, it is that disengagement is positively correlated with the rise of the terrorist threat. The U.S. must lead a broad coalition of countries to uproot terrorist groups from wherever they control territory. Radical Islamic extremism is a global phenomenon and it will require a global strategy to mitigate.

The U.S. has not kept up with the rapidly changing nature of the threat environment. While our military is more likely to continue engaging in nonconventional conflicts, the structure of the Department of Defense (DoD), the way our forces are trained, and the types of equipment the department purchases all reflect preparation for conventional warfare. Insurgent groups discovered quickly the advantages of fighting this kind of asymmetric conflict. There is a need to reexamine the way the DoD operates to ensure it is the most flexible and efficient military force in the world. As the wars in Iraq and Afghanistan have demonstrated, raw power does not determine military victory — flexibility and efficiency does.

America is the country people around the world look to as the shining example of liberty. They consider us the global champion for human rights and to act when those rights have been violated. Shirking from this responsibility has damaged our international credibility immensely.

We must restore American leadership by speaking up when countries violate the principles of international order. We must demonstrate our commitment to make this world a more free and prosperous place by upholding the promises we have made to our allies."

Forgetting, for the moment, questions having to do with how is it that stationing our military in harm's way all over the globe keeps Americans safe, particularly if the complaint about terrorism begins with the shooting at the Pulse. Which, if you think it through is prima facie evidence that troops abroad do not protect us from terrorist acts here at home.

Let's examine that "shining city" thing for just a minute.

Click on some headlines which link to the original site of their publication.

As America Gives Thanks, Homelessness Continues To Set New Records In Major Cities All Over The Nation

Three Americans Now Own More Wealth Than Bottom Half of US Combined: Report

That oughta keep you busy for a minute.