Of the millions of bands in the mid 60's that were inspired/influenced by The Beatles' the very best IMHO was Uruguay's Los Shakers. 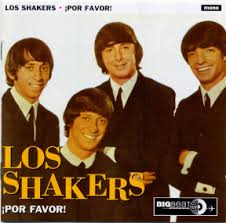 Leaders of the Uruguayan Invasion, Los Shakers' command of Beatlesque harmonies and songcraft made them for a time as popular in Argentina and Uruguay as The Beatles were in the UK and the States.

After three succesful albums of Beatle influenced, Mersey Beat through Psychedelic music, Los Shakers parted company with their label over the band's desire to record music influenced by more traditional Uruguayan and Argentine influences and soon broke up.

From the movie La Escala Musicale in 1965, this is Hugo Fattoruso on lead vocals, guitar and piano, Osvaldo Fattoruso on vocals and rythm guitar, Roberto "Pelin" Capobianco on bass guitar and Carlos "Caio" Vila on the drumkit.